Bosch Power Tools, in the course of their  ongoing quality controls  have determined that, due to a faulty component, the cutting or grinding disc together with the fastening fixture (spindle) could become detached during operation on a limited number of  series GWS 20, GWS 22 and GWS 24 angle grinders. These models were produced from June 2016 through to August 2016.  The model GWS 24-230 JVX Professional with brake is from the production period February 2016 to October 2016.

They can be clearly identified in the following ways:

1. On the tool’s original packaging:

2. On the type plate (found on the tool itself): 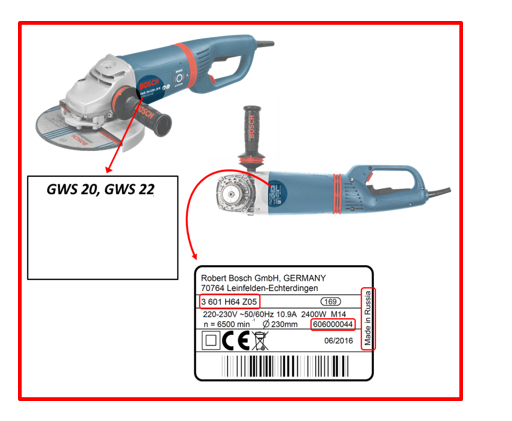 Consumers can check online whether their angle grinder is affected on the www.anglegrindercare.com website. If so, we urge them to call Bosch Power Tools as soon as possible on their customer service number 01-4666700.